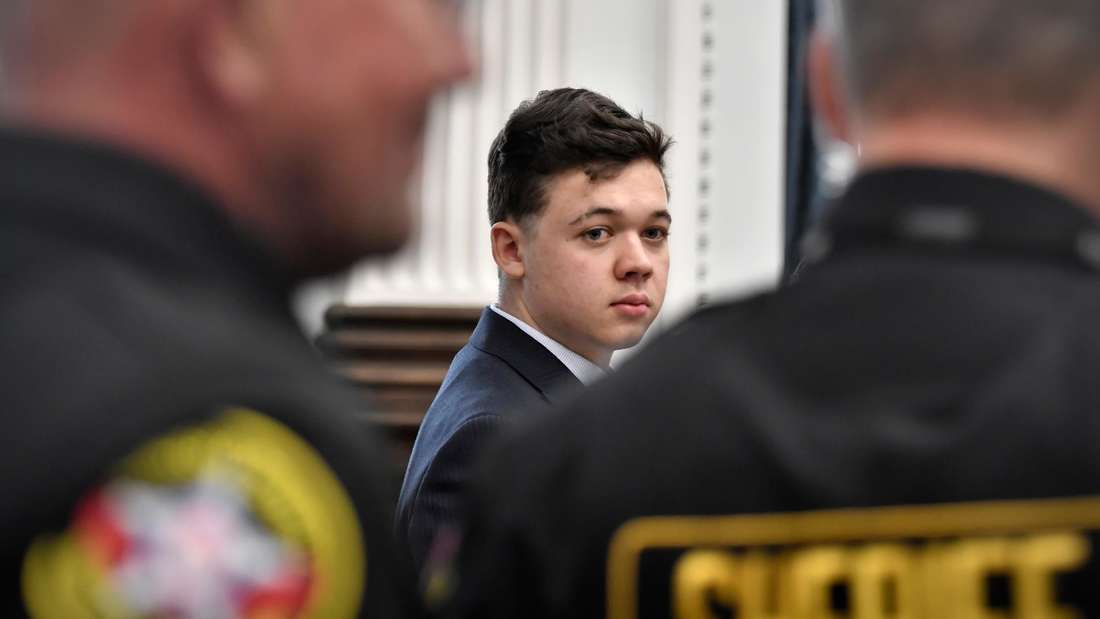 Kyle Rittenhouse shoots two people dead during a Black Live Matters demo and is acquitted. For the jury and the court, the case is clear.

Kenosha – Kyle Rittenhouse is a free man. The 18-year-old, who shot two people dead last year, was acquitted of all charges by the 12-member jury. More than 30 witnesses were heard in the case, which was followed with great interest worldwide, and the jury then took 25 hours to reach their verdict. A judgment that raises questions.

How can it be that a 17-year-old man who took a gun to a Black Lives Matter demonstration and killed people there was acquitted? And how can it be that he is granted self-defense, even though his armament only led to the fateful events of August 25, 2020?

The US media company CNN relies on legal experts who have extensively analyzed the Rittenhouse case to answer this question. The lawyers call the testimony of the accused the most important point. He had testified in court that he had acted in self-defense. He shot Joseph Rosenbaum because he had previously threatened and pursued him and tried to take his gun away from him. During the course of his testimony, the 18-year-old broke down in tears.

“If Mr. Rosenbaum took my gun away from me, he would have used it, killed me with it, and probably shot more people,” Rittenhouse said. The other men he shot in Kenosha were part of a “mob.” Including Anthony Huber, the second man killed by Kyle Rittenhouse.

Rittenhouse’s testimony in court was a prepared strategy for his defense. His attorney, Mark Richards, told reporters after the acquittal that he had assembled two “shadow juries” ahead of the trial and played through the trial. He had Rittenhouse testify before one of these juries, but not before the other. The result was significantly better in the first case, so it was decided that the accused would also testify in the real trial and not have his right to remain silent exercised.

CNN legal analyst Joey Jackson sees this as a crucial building block for the acquittal that ultimately took place: “It made him human. More importantly, he was able to explain his use of force himself.” Lawyer Elie Honig agrees. The former federal prosecutor told CNN that Rittenhouse’s testimony gave the jury a better understanding of his motives. While the prosecution could not produce enough evidence to incriminate Rittenhouse, his words persuaded the jury that he never fired until he himself was attacked.

According to civil rights attorney Charles F. Coleman Jr., the trial consisted of two competing narratives: one that Rittenhouse was a victim who was assaulted, and one that a vigilante provoked the violence in the first place: “The jury went along the narrative of Kyle Rittenhouse as the victim, as they rated his self-defense claims significantly higher than the provocations cited by the prosecution.”

Wisconsin law permits the use of deadly force only when it is “necessary to prevent imminent death or serious bodily harm.” Because Rittenhouse’s defense attorneys cited the need for self-defense, it was up to prosecutors to establish beyond a reasonable doubt that Rittenhouse was acting in self-defense.

Criminal defense attorney Sara Azari told CNN that prosecutors could not prove that the fatal shooting of each of these men was “unreasonable.” According to the available video material , the jury had no choice but to follow the defense’s arguments.

For defense attorney Bob Bianchi, the testimonies were also responsible for the outcome of the trial. These would have challenged many of the prosecution’s allegations, and even witnesses called by the prosecution itself would have partially reinforced the defense’s self-defense narrative.

Even Gaige Grosskreutz, the third man shot by Kyle Rittenhouse, testified that he first aimed his gun at Rittenhouse. Although he later added that this had not been his intention, the jury probably remembered that this statement also supported the arguments of the defense. For lawyer Bianchi, the matter is clear: “No real trial attorney can be of the opinion that this was not an astonishingly clear case of self-defense.”

Prosecutors, for their part, had attempted to portray Kyle Rittenhouse as an “active shooter.” In his closing argument, Kenosha County Assistant District Attorney Thomas Binger said that Rittenhouse behaved “in a way no sane person would.” He provoked the events and ruthlessly fired his gun.

Kyle Rittenhouse: Jury was instructed to look at the case through the eyes of the defendant

Lawyer Honig contradicts this version: “The attempt to portray Rittenhouse as an active shooter did not work. The defense was able to use the video footage to show that Rittenhouse walked the streets without firing his gun. He didn’t shoot indiscriminately, only at people who had previously attacked him.”

The argument that Rittenhouse already provoked by wielding the AR 15 firearm didn’t hold up either. This is due to the gun culture in the state of Wisconsin, lawyer Bianchi told CNN: “You have to remember that this is a jurisdiction where carrying guns is not uncommon.”

CNN legal expert Laura Coates considers another point to be crucial. The jury was instructed to see the case through the eyes of the accused and not through those of a sensitized public. It was about the definition of “appropriate”: “It was about what Rittenhouse seemed justified at the moment of the crime and whether he could have believed that he was actually in an emergency.” (Mirko Schmid)

A previous version wrote about “illegal” armament at this point. In fact, Judge Bruce Schroeder dropped that charge. The passage has been revised accordingly.